U.S. rapper T.I., also known as T.I.P., is being sued for $5 million by a group of people after his FLiK token has reportedly failed, according to court documents obtained by U.S. celebrity news media The Blast. More details of the pump and dump.

Floyd Mayweather and DJ Khaled have been hit with a lawsuit from people who claim the stars participated in an illegal cryptocurrency scam that screwed investors out of millions of REAL dollars.

The coin at the center of the scandal is called Centra Tech — and, according to the class action lawsuit, Floyd and Khaled were influential celebrity endorsers who promoted the virtual currency on social media.

In fact, social media posts from Floyd encouraged people to buy the coin and he said he was so excited about it, “You can call me Floyd ‘Crypto’ Mayweather from now on.” 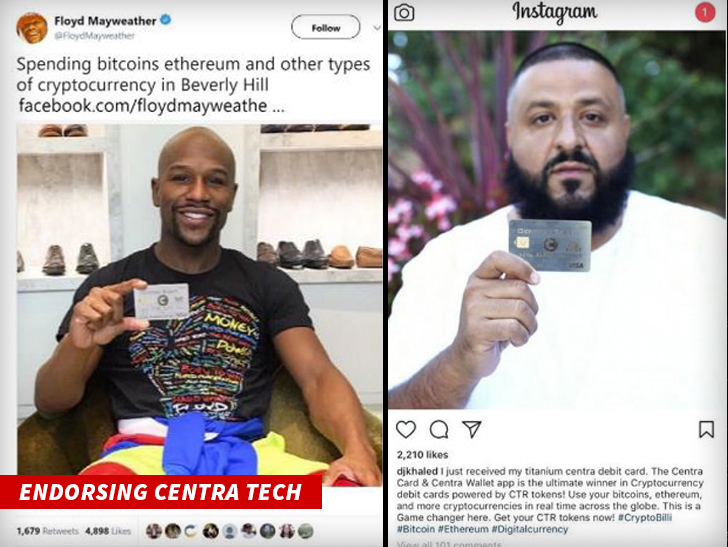 To: All persons or entities who purchased or otherwise acquired Cloud Tokens (“CLD Tokens”) pursuant to Cloud With Me Ltd.’s Initial Coin Offering which began on approximately July 25, 2017 and was ongoing as of June 19, 2018. You are hereby notified that Levi & Korsinsky has commenced the action Balestra v. Cloud With Me Ltd. (Case 2:18-cv-00804-LPL) in the United States District Court for the Western District of Pennsylvania. To get more information go to:

The complaint alleges that Cloud With Me violated Sections 12(a)(1) and 15(a) of the Securities Act of 1933, by engaging in interstate commerce for the purposes of offering, selling, or delivering unregistered securities. The complaint alleges that the CLD Tokens constitute securities by virtue of defendants’ assertions that the CLD Token would increase in value as it became the “standard currency” for the Company’s yet-to-be-created decentralized cloud network as well as the continuous focus in Cloud With Me’s marketing campaigns on the “significant liquidity” CLD Token would have as it became listed on multiple virtual currency exchanges.

If you purchased CLD Tokens pursuant to the ICO you have until August 20, 2018 to request that the Court appoint you as lead plaintiff. Your ability to share in any recovery doesn’t require that you serve as a lead plaintiff.

Levi & Korsinsky is a national firm with offices in New York, California, Connecticut, and Washington D.C. The firm’s attorneys have extensive expertise and experience representing investors in securities litigation, and have recovered hundreds of millions of dollars for aggrieved shareholders. Attorney advertising. Prior results do not guarantee similar outcomes.

One of the world’s most prominent promoters of initial coin offerings is calling it quits.

John McAfee, the anti-virus software pioneer turned cryptocurrency evangelist, said in a tweet on Tuesday that he will stop recommending ICOs because of unspecified “threats” from the U.S. Securities and Exchange Commission.

“Due to SEC threats, I am no longer working with ICOs nor am I recommending them, and those doing ICOs can all look forward to arrest,” McAfee wrote from his verified Twitter account, which has more than 820,000 followers. “It is unjust but it is reality. I am writing an article on an equivalent alternative to ICOs which the SEC cannot touch. Please have Patience.”

At least, that’s the claim at the heart of a class-action lawsuit filed against Ripple Labs, its CEO Brad Garlinghouse, and its subsidiary XRP II.

Taylor-Copeland Law, a firm focused on blockchain and crypto litigation, filed the Ripple lawsuit in California court Thursday on behalf of Ryan Coffee and other Ripple investors. They allege that Ripple made money by breaking state and federal securities laws and purposefully misleading the public.

Director of Enforcement James McDonald, stated: “As this case shows, the CFTC is actively policing the virtual currency markets and will vigorously enforce the anti-fraud provisions of the Commodity Exchange Act. In addition to harming customers, fraud in connection with virtual currencies inhibits potentially market-enhancing developments in this area. We caution potential virtual currency customers, once again, that they should engage in appropriate diligence before purchasing virtual currencies.”

Specifically, the CFTC Complaint alleges that from at least January 2014 through January 2018, the Defendants fraudulently solicited potential and existing MBC customers throughout the United States by making false and misleading claims and omissions about MBC’s value, usage, and trade status, and that MBC was backed by gold. Defendants also allegedly fraudulently solicited numerous customers in the District of Massachusetts, receiving in excess of $5 million from those customers.

As customers began to raise questions about their MBC accounts, Defendants attempted to conceal their fraud by issuing additional coins to customers and falsely representing that they had secured a deal with another exchange to trade MBC, according to the Complaint. Defendants allegedly encouraged customers to refrain from redeeming their MBC holdings until MBC was active on this “new” exchange.

As further alleged in the Complaint, Defendants misappropriated virtually all of the approximately $6 million they solicited from customers. Defendants allegedly used these misappropriated funds to purchase a home, antiques, fine art, jewelry, luxury goods, furniture, interior decorating and other home improvement services, travel, and entertainment.

In its continuing litigation, the CFTC seeks civil monetary penalties, restitution, rescission, disgorgement of ill-gotten gains, trading and registration bans, and permanent injunctions against further violations of the federal commodities laws, as charged.

The CFTC has issued a Customer Advisory on the Risks of Virtual Currency Trading to inform the public of possible risks associated with investing or speculating in virtual currencies or recently launched Bitcoin futures and options. The CFTC has also issued several other customer protection Fraud Advisories that provide the warning signs of fraud.

Customers can report suspicious activities or information, such as possible violations of commodity trading laws, to the CFTC Division of Enforcement via a Toll-Free Hotline 866-FON-CFTC (866-366-2382) or file a tip or complaint online.

Today, we have a class action lawsuit filed against the Centra ICO on behalf of Plaintiff Jacob Zowie Thomas Rensel.

The Centra ICO received the tacit endorsement of Boxing Champion Floyd Mayweather, sometimes know as “Floyd Crypto Mayweather” was joined by world famous rapper DJ Khaled that “led to a patina of credibility,” according to the New York Times. Of course, this is just nice talk meaning they pumped the ICO on their social networks.

More About the Pump and Dump.